Maths Genius Aged 10 gets an A* Maths GCSE using 10ticks 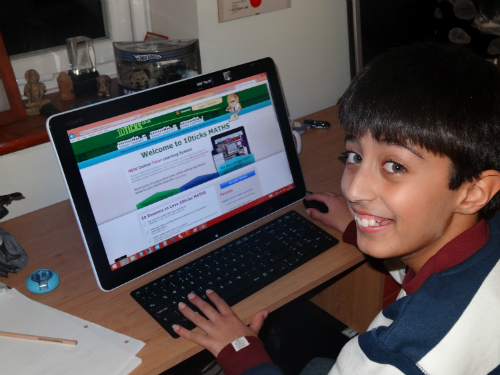 A boy aged only 10 from Woking in Surrey has managed to achieve an A* at GCSE by using 10ticks Online Maths Learning System aimed at children aged 5-16. Ram, aged 10, attends Woking High School in Woking, Surrey and has excelled in maths from an early age. Since the age of 5 he has been building adult Lego sets which helped his passion for solving difficult and complex problems.

Not wanting to pay for expensive tutoring, his father searched the internet for an online resource which could push on his child. Rajan sourced 10ticks, an online maths e-learning system, which gives online lessons for children aged 5-16 through videos, games and worksheets.

Ram started using the system just 3 times a week, for roughly 30 minutes each time. His main focus was learning the topics through the videos and then doing the tests. He progressed quickly up the levels at a lightning pace. “He was flying through the work, I couldn’t believe it. I kept thinking I will increase the difficulty and he will reach a peak, but he just didn’t. The 10ticks system made it so simple to increase the difficulty so I just kept going” said Ram's father.

After working on the system for 18 months he had reached the highest level possible working at level 9/10 appropriate for A* at GCSE. He started the course at just level 5 and had increased by 5 levels in just 18 months. He continued to excel so his father decided to speak to the school about putting him in to complete a GCSE. “I spoke to the school and showed them his work through the online system. They knew he was bright and after a little persuasion they decided to let him”.

Last month an excited Ram received his result, showing that he had got an A* at GCSE. His father has already spoken to the Secondary School who are talking about his now working towards his A- Level. After receiving the result his father got in touch with 10ticks to tell us how good the system has been. “I got an email off a very excited father. It’s such a nice story. We have 1000s of children working on the system and it just goes to show that hard work does pay off. Ram is a great role model out there for many aspiring youngsters. We have had some great results from students using 10ticks, many increase by 2 grades. It shows what can be achieved using 10ticks if parents give their child a push. We wish him all the luck in his A-Level”, said Darren, Head of Marketing.

Ian Fisher who is the Managing Director for 10ticks, who also operate in Malaysia, Australia and South Africa said “This is a fantastic result and quite unlike anything we have ever seen before. This is exactly why we built such a system. My sole aim was to increase education attainment and make maths for fun for all. In the past two years the system has grown from a few hundred to tens of thousands. Ram is such a role model for people out there. Just sending your kids to school is no longer enough, teachers get less than one minute per lesson for each child. The system we have created pushes on each and every child and offers personalised learning that teachers don’t have time for any more. So whether your child is falling behind in school, middle of the road or ahead of the class, the answer is all the same, you need to push them on” said Mr Fisher.

Mr Fisher, a maths curriculum expert of 5 countries, also went on to say “The job market is so competitive now, every employer looks for grade C or above in Maths, English and Science. Giving your child the best possible chance to succeed is key, and that is exactly what we provide. Unlike other online systems we take a blended learning approach and that is key to these vast improvements. John Hattie and Geoff Petty, the Gurus of educational improvement, have shown time and time again that online systems need to make room for all learning types. That is why we have worksheets as part of the system. Kids print them off and work from them, we also have lots of online elements from Videos, to Games and Tests, but this online/offline balance is crucial to success. Children only have to log in for between 20 and 40 minutes 3 times a week and you will see the improvement it has on their grades. On the website we offer a free trial and I would urge all parents to take it.”

Your message has been sent, you will receive a reply within 1 working day!

We’d love to send you exclusive offers, competition details and the latest info from 10ticks by email. We’ll always treat your personal information with the utmost care and will never sell them to other companies for marketing purposes. You can unsubscribe at any time.
Read our privacy policy

Yes please
No thanks